It may sound a bit morbid but old cemeteries have always fascinated me. It’s interesting what you can figure out from wandering around – or at least, what you think you figure out. It is very different wandering an old cemetery in Nebraska or Colorado or any number of other states and imagining the Old West pioneers, ranchers, and homesteaders, however, than it is wandering through any of the national cemeteries.

Recently we visited Fort McPherson National Cemetery near Maxwell, Nebraska. My father, mother and stepfather, and maternal grandparents are buried there and Fort McPherson is where Tom and I plan to also be buried.

Fort McPherson is located in the Platte River Valley which played a very important role in the history of western movement in the U.S. The “Great Platte River Road” was the major pathway for traders and trappers in search of furs, settlers seeking land, miners headed for the riches of the Rocky Mountains and the first transcontinental railroad linking the east and west coasts.

Fort McPherson was established on September 27, 1863, to provide protection for the building of the railroad and the pioneers trekking west on the Oregon and California trails and to keep peace with the local Native Americans. The fort, initially named Cantonment McKean, was located on the banks of the Platte River, at the mouth of Cottonwood Canyon, a strategic location near the junction of the North and South Platte Rivers. Cottonwood Springs, a natural seep in an abandoned bed of the river, was the only spring for many miles along the river. For a time the fort was known as Post of the Cottonwood Springs. The fort was built by troops of the 7th Regiment Iowa Volunteer Cavalry using cedar logs cut in Cottonwood Canyon and was completed in October 1873.

The name was changed to Fort McPherson February 20, 1866, in honor of Major General James B. McPherson who was killed in action in 1864 during the Battle of Atlanta. Numerous expeditions were launched from Fort McPherson during the Indian Wars.

Fort McPherson National Cemetery was established on March 3, 1873, on the Fort McPherson Military Reservation. As the Army closed frontier posts in Wyoming, Colorado, Idaho, South Dakota and Nebraska, soldier and civilian burials from 23army post cemeteries throughout the west were relocated to Fort McPherson. The fort itself was abandoned in 1880 but the national cemetery was maintained.

Fort McPherson is the final resting place of four Medal of Honor recipients: 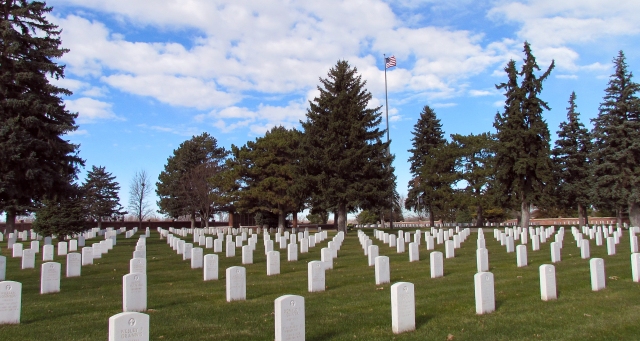 Sixty-three Buffalo soldiers from the 9th and 10th U.S. Cavalry, originally interred at Fort Robinson, were transferred to Fort McPherson in 1947 when Fort Robinson was deactivated.

Spotted Horse, a Pawnee Indian scout; Baptiste Garnier who served as chief of scouts at Fort Robinson; and Moses “California Joe” Milner, who served as a scout for both Gen. George A. Custer in the Black Hills and Gen. George Crook, are all interred at Fort McPherson.

There are 541 unknowns at Fort McPherson. Many of these were relocated from other post cemeteries and at the time the markers were too weathered to allow identification.

Fort McPherson is a small cemetery in a quiet valley in western Nebraska, but tells an important story. A visit to a national cemetery impresses with the sense of peace and reverence and the rows upon rows of gravestones seeming to stand at attention remind one of the many who were willing to serve our country and for whom we need to be very thankful. 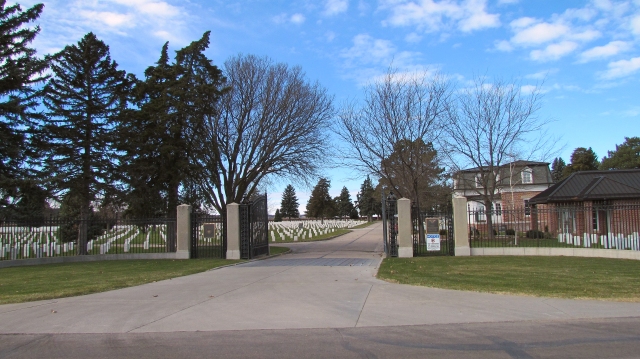