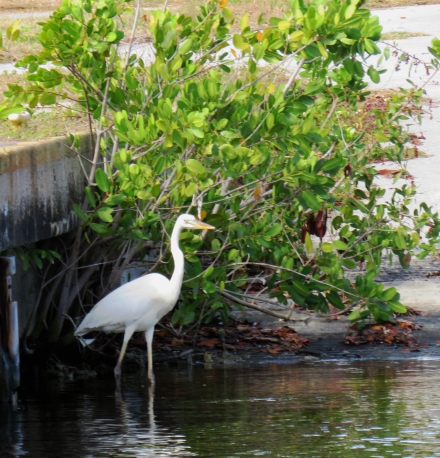 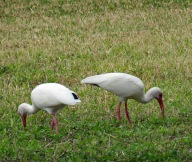 A subtropical wilderness of saw-grass prairie, junglelike hammock, and mangrove swamp, Everglades was originally created to reserve a portion of this vast ecosystem as a wildlife preserve. Although short-term visitors don’t see most of them, more species of flora and fauna exist in the Everglades than in any other national park. Most commonly seen are alligators and birds. During our visit, many migratory birds were present.

The popular image of a quicksand-filled swamp is far from the reality of the Everglades. The floor of the Everglades is rock hard but porous as a sponge. During the summer, the limestone bedrock in the fresh-water Glades is well underwater but by spring, jagged eroded limestone stands dry and white in the hot sun.

There are two seasons: wet and dry. The diverse life in the Everglades depends upon a rhythm of abundance and drought. That balance has been increasingly threatened by land development and agribusinesses around the park which divert precious water.

Our first exploration began at Flamingo in the southernmost part of the park. There we boarded a boat for a backcountry tour

The tour took us from Flamingo north on Buttonwood Canal, through Coot Bay and Tarpon Creek to Whitewater Bay on a portion of the Wilderness Waterway. Intrepid souls can travel the whole length of the park by canoe or kayak, carrying absolutely everything they need for the trip of roughly two weeks. There are elevated platforms, called chickees, at strategic spots for camping. We met a couple of canoers who were on the ninth day of their trip. They were still smiling. 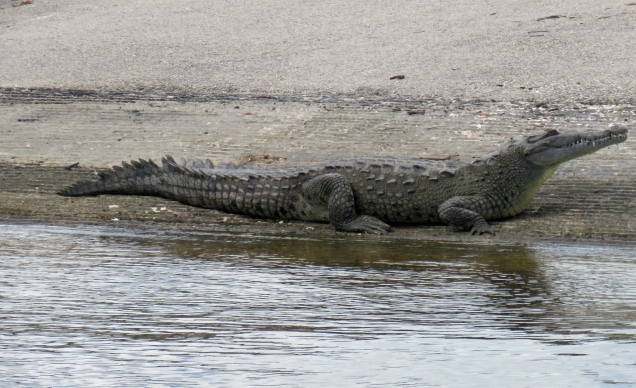 Buttonwood Canal was built to provide rangers a shorter route from Flamingo to patrolling the backcountry. It is three miles long and cut off about 40 miles to reach Whitewater Bay. Unfortunately, the resulting inflow of salt water from the bay wreaked havoc on the ecosystem. It took about 25 years before a system of locks was instituted to restore the balance. 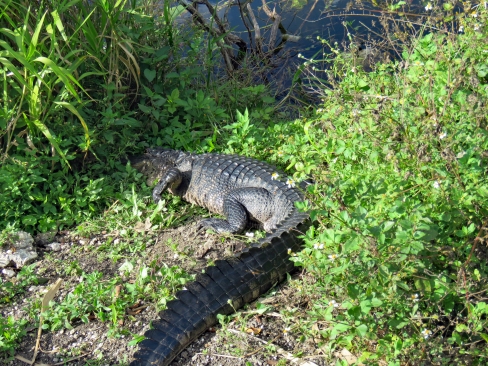 In this part of the park, fresh and sea water mix creating brackish water. This is the only place in the world where alligators and crocodiles co-exist. We did see alligators but no crocodiles. Alligators thrive in fresh water while crocodiles prefer salty and brackish. A variety of birds appeared during our tour. 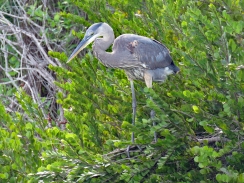 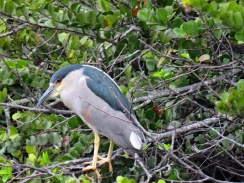 We learned there are three types of mangroves – red, white and black – which grow here. They look somewhat like they are on stilts with roots extending out and down in tangled masses. Tannic acid from fallen mangrove leaves gives the water its red-brown color. The root systems provide a nursery for many marine animals and their branches serve as rest stop for migratory birds. 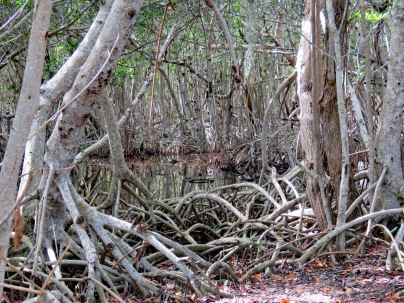 We did several short hikes to hammocks. These hammocks appear as humps of trees emerging above the flat landscape. The hammocks are “tree islands” where hardwoods such as mahogany, live oak and gumbo limbo grow on limestone mounds. Many are surrounded by “moats” created by runoff from the island. These hammocks serve as homes for a variety of animals and were where the Indian residents of the Everglades lived and grew their crops.

The Anhinga Trail, near the visitor center, a half mile long, boardwalk constructed above water, was the most crowded trail we hiked. Neither of us had ever heard of an anhinga – turns out it is a water bird which fishes with its sharp bill and then spends time spreading its wings in the sun to dry and reheat the water-cooled blood racing through the thin wings. Sometimes called the water turkey or snakebird the anhinga swims with its long sinewy neck sticking out of the water. We enjoyed watching them, including a nest of young. This area also was home to a variety of other birds. 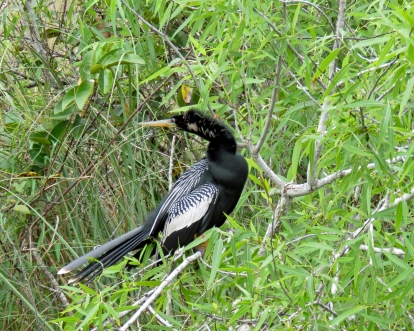 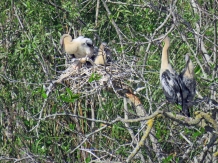 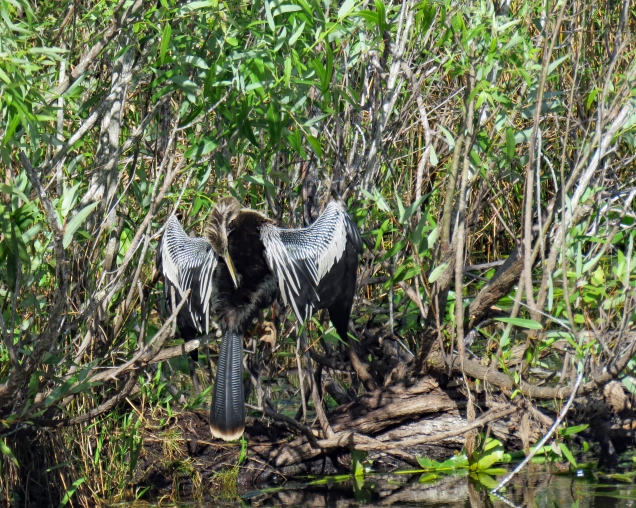 At one point, we were observing a heron and an alligator “co-existing.” It really looked like we were about to see nature in the raw but the bird very calmly and slowly moved away as the gator moved, also very slowly, closer. The alligator takes a meal only once or twice a week so maybe this was the heron’s lucky day and the gator wasn’t hungry. 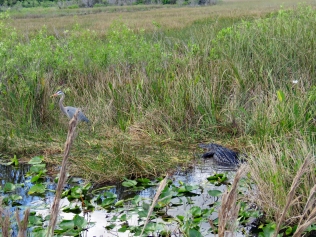 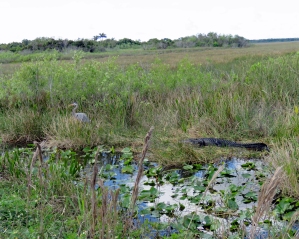 In the northern part of the park, we arrived at the Shark Valley entrance before the gates opened but were treated to sightings of an alligator and numerous birds while we waited. The purple gallinule has large feet which enable it to walk across aquatic plants hunting for insects. 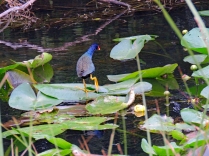 On the two-hour narrated tram tour in Shark Valley, we were told you don’t call the Everglades a swamp – it’s a “river of grass.” The overwhelming feature of the Everglades is its flatness – the 1.5 million acres of the park average an elevation of 11 feet. The “river of grass” is roughly 75 miles wide and over 100 miles long and the water from Lake Okeechobee flows southward at about ¼ mile per day which means that water from the northern part takes over a month to get to the gulf. 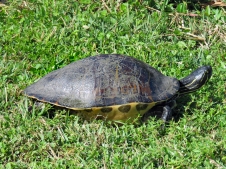 During the tram tour, Tom counted more than 50 adult alligators as well as numerous juveniles and hatchlings. In addition to all the alligators (some extremely near), we saw countless wading birds and several turtles. The alligator is an important part of the balance in the Everglades and is a provider as well as a consumer of life. Female alligators guard their nests but even so, the eggs and hatchlings often become food for other animals and birds. Although the alligator itself eats just about every other animal in the Glades and can strike lightning fast, it does eat rarely. In dry times, the alligator roots out mud and plants from depressions in the bedrock until reaching water, creating the “gator holes” to which all other living things gravitate for water, thus helping maintain the delicate balance of life in the Everglades. 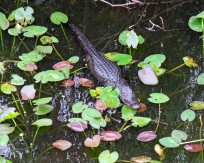 Everglades National Park is a truly unique and fascinating place.