In September on our way to Phoenix, we made a slight detour to visit El Malpais National Monument and National Conservation Area southwest of Grants, New Mexico. El Malpais – the “badland” – is a landscape that encompasses volcanic cones, craters, natural arches, ice caves and the “river of stone” that we explored.

El Malpais was created by lava flows from some forty volcanoes and over eighty vents and spatter cones. The most recent lava flow occurred between 2,000 and 3,000 years ago pouring out of McCarty’s Crater. All four major types of volcanoes can be found here – basalt cones, cinder cones, shield volcanoes and composite volcanoes.

For more than 10,000 years people have interacted with this landscape. Peak human occupation occurred between 950 and 1350 when this area was on the fringe of the Chaco Canyon political and economic system. Each of the native tribes living in the vicinity of El Malpais has their own distinct legend and name for the lava. The Spanish conquistador Francisco Vásquez de Coronado led expeditions in this area in 1540. When New Mexico became a territory in 1848, El Malpais was basically seen as a hindrance to travel. During the Great Depression of the 1930’s some homesteaders and sheepherders moved into El Malpais.

Since we had limited time, we decided to explore the eastern side of El Malpais. The Sandstone Bluffs Overlook provided a view of the broad valley which was covered with lava. Since this most recent flow area occurred about 3,000 years ago and there is limited vegetation even now, it was easy to see how volcanic activity changes a landscape for millennia. It seemed a river of lava had covered the valley and was contained by the sandstone bluffs. 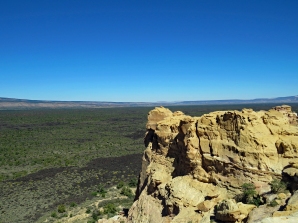 La Ventana Natural Arch was a very short hike from the road and is one of New Mexico’s largest natural arches.

We took a longer hike in the Lava Falls Area. There is always something slightly eerie about hiking in lava. Many of the features bear Hawaiian names as early scientific knowledge of volcanoes was developed in Hawaii. Kīpukas are undisturbed areas that lava encircled but did not cover, thus creating islands of native plants and animals. The two types of lava present different hiking challenges. Smooth, ropy lavas are pāhoehoe and sharp, jagged lavas are `a`ā. 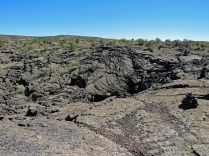 The trail was quite well marked with cairns but it would certainly be easy to get off trail and difficult to determine the correct path. This most certainly would not be a place to hike in midsummer with absolutely no shade to be had and heat radiating off the lava.

We enjoyed our brief visit to El Malpais and would like to return to explore the western portion, hike, and visit ice caves and lava tubes.