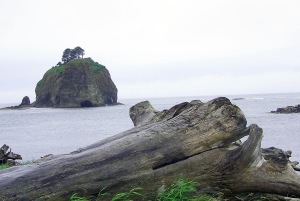 Olympic National Park is a vast and diverse park, boasting three distinct ecosystems – temperate rainforest, coastal, and mountainous. Of the approximately 366,000 acres of the park, over 95% is designated as wilderness and is very nearly inaccessible. Much of it can be reached only on foot via the six hundred miles of trails or, for the very adventurous, cross-country. It becomes readily apparent why the Olympic peninsula remained unexplored for so long. 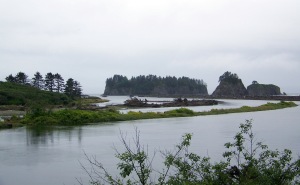 Olympic National Park’s 73-mile long wilderness coast is a rare treasure. Rocky headlands, tidepools, sea stacks and wind-twisted trees are a remnant of a wilder America. Much of this narrow coastal strip of park is designated wilderness. 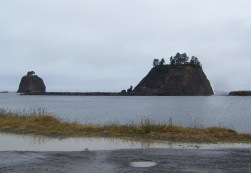 Sea stacks, impressive rock formations rising up offshore, were once part of the shore but have been isolated by the sea. The small town of La Push is near First Beach, Second Beach, and Third Beach which are littered with driftwood and huge logs that wash up. Whales are often seen and the tide pools teem with life in miniature. 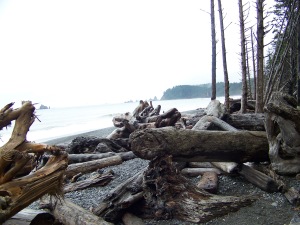 A mild coastal climate with prevailing rain and fog provides the ingredients for a temperate rainforest. The Hoh Rainforest is pretty incredible. There are more colors of green than you can name, so vibrant they very nearly shimmer. It’s surprising to find that the colors are much more intense when it is overcast and even lightly raining than when the sun is shining. For photography, this proves to be a boon as it is nearly always lightly raining. The vast number of mosses draping the trees and the myriad ferns create an “other-worldly” feel. With a light rain jacket always present, we hiked a number of interesting trails and thoroughly enjoyed the rainforest. 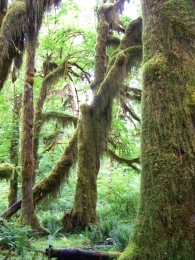 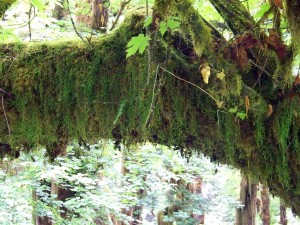 The banana slugs we encountered are somewhat other-worldly as well, creatures ranging from pale yellow to black to a black and yellow combination, slowly moving like a worm with a snail’s feelers bobbing on its elongated head. 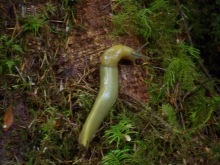 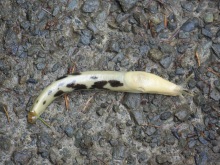 Because of the abundant moisture, the trees do not develop deep root systems. As a result, they are prone to fall in strong winds. As these fallen giants begin to decay, they are ideal for seed germination and often become nurse logs enabling the growth of colonnades of trees. As the nurse logs further decay and crumble, the new trees appear as though they are on stilts. Red cedar, hemlock, and Douglas fir grow to immense size in this environment. 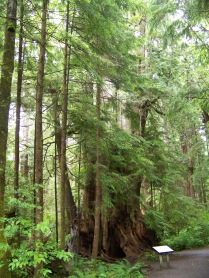 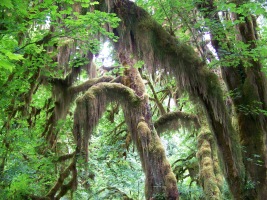 Forks, Washington, is a small town which has become famous as the home of Bella and Edward of the Twilight series. In Forks, there are “Twilight” events and tours and all sorts of “Twilight” souvenirs, even including ice cream flavors. Although I was a middle school teacher and the Twilight series was extremely popular with that age group, prior to our travel there, I had not read any of the books. Vampires just don’t really appeal to me. After visiting Forks, I had to read at least one and did gain an appreciation for the area as a backdrop for the books. The foggy grey of the air, and the fantastic shapes created by mosses, lichens and other epiphytes draping the massive trees certainly set an appropriate mood for the books. 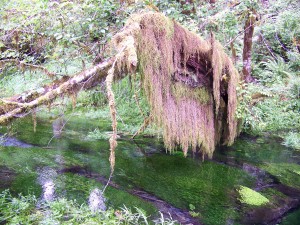 In addition to the obsession with Twilight, Forks is also home to several quite good places to eat and numerous lodging options, including the Huckleberry Lodge, which offers cabins as well as several RV spaces. We stayed in one of the cabins there. The hospitality was magnificent and while we were there, even included an impromptu dinner in the gazebo hosted by the owners. 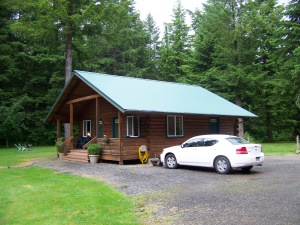 We visited Olympic at a time when an unusual historical project was in progress and later continued to follow it. Elwha River Restoration is a National Park Service project that includes the largest dam removal in history, restoration of the Elwha River watershed, its native anadromous fish, and the natural downstream transport of sediment and debris.

Elwha Dam was built in 1911 and, in1927, the Glines Canyon Dam was built 7 miles upriver. These dams were constructed to provide hydroelectric power and were effective in that respect but blocked passage for migrating fish and limited them to the lower 4.9 miles of river below the dam. When we visited, the draining of the lakes behind the dams had begun. Today, both dams are gone, the two reservoirs have drained and the Elwha River flows freely from its headwaters in the Olympic Mountains to the Strait of Juan de Fuca. Native habitats and vegetation are being restored and the anadromous salmon and trout are naturally migrating past the former dams for the first time in over a hundred years. 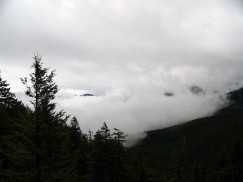 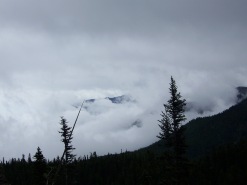 Hurricane Ridge reportedly offers some magnificent mountain views. I say reportedly as the day we drove to the visitor center there, it was so foggy you could see absolutely nothing. I guess those magnificent views will have to be another trip. 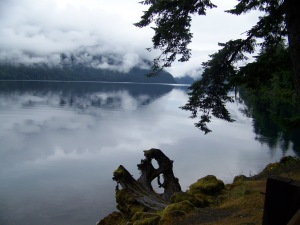